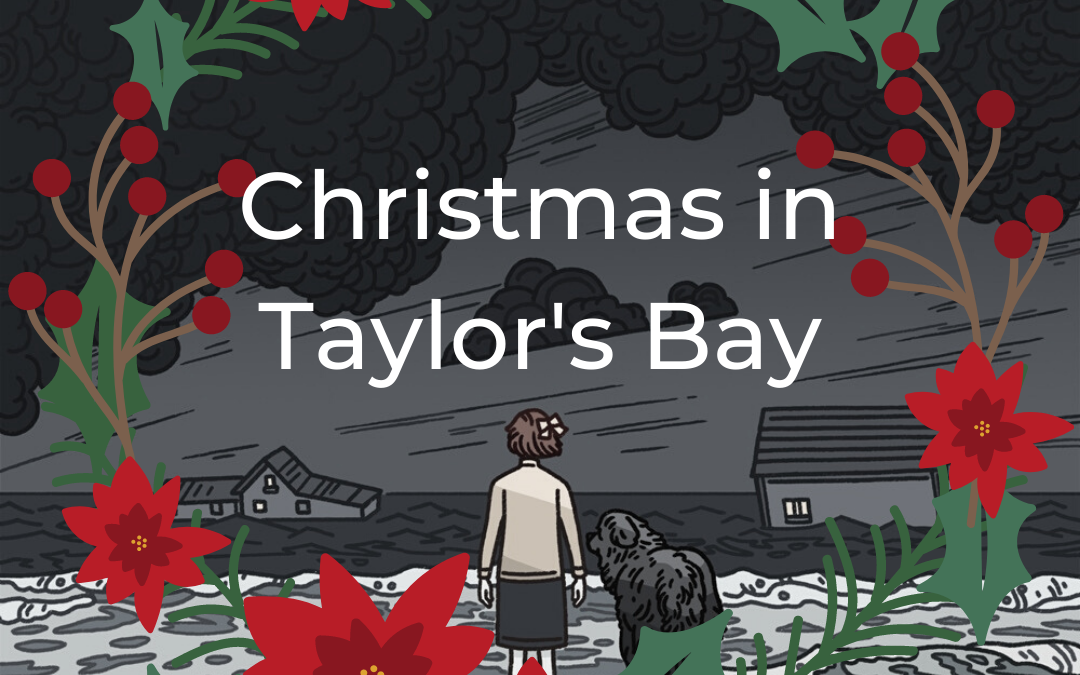 Dinner and the washing-up were finished. They’d eaten the last of the leftovers from Christmas dinner, too. Tomorrow it would be back to salt fish and cabbage.

In the dimly-lit kitchen, Winnie was near bouncing with excitement. They’d been planning their costumes for weeks and Henry had even been practicing a deep voice to try and fool their neighbours. This year, surely, would be the year they could fool everyone!

“Are you coming, Eddie?” Winnie asked her big brother, layering Nan’s nightgown on top of her woollen coat. She was already getting hot standing by the stove.

“Nah, mummering’s for kids,” he replied.

“You’re still a kid,” she said reproachfully, pausing to peer up at him with the nightgown partway over her head.

Eddie stretched, shrugging. “Not much longer. I’m not going back to school once the fishing season starts up. I’m ready to be out on the schooner with Dad and Uncle Bert.”

She frowned at him and tugged the worn flannel all the way on. “Why the rush?”

“It’s just time, little sis,” he said, reaching out to muss her hair.

“Hey!” She jerked back, out of reach of his hand, and nearly stumbled. Her lame leg twisted awkwardly and made it hard to catch her balance.

“Fine,” she said, looking down at the floor. The hem of the nightgown trailed across the weathered wooden boards.

Henry bounded into the kitchen just then, carrying Uncle Bert’s hip waders. Celia trailed after him. She held a thick woollen scarf and hat in her hands. Winnie looked up at them, catching their excitement.

“I’m going to make a big hump on my back,” Celia said breathlessly. “And then I’ll hide my face with the scarf, pull the hat down low so no one can see my face.”

“And I’m going to wear these!” Henry exclaimed, struggling to clamber into the tall rubber boots that Uncle Bert wore when he was wading in cold water. The boots dwarfed his small frame, and he had to grip them tightly with both hands to even move around.

Winnie laughed at the sight. “Sure you are,” she said. “How are you planning to walk to the other houses, then?”

Henry glared at her. “I’ll manage it.”

“That’ll be some sight,” Celia said, chuckling as she stuffed a blanket into the back of her dress to create a lumpy mass.

“Eddie, can you fetch me that old pillow case?” Winnie said, perching on a kitchen chair to rest her leg. She massaged her knee for a moment to relieve the ache that always settled there. No one else seemed to notice the small gesture, but that was fine by her. She didn’t need their worry or their pity. The burden was hers to bear.

Eddie was half-turned back to her when she made the second request. He froze mid-movement and grimaced at her.

“You couldn’t ask for both at once?” he grumbled, straightening up and going to fetch the shears from the drawer beside the stove.

She opened her mouth to reply, but when he came back, he smiled easily at her. “No worries, little sis. Just wrenched my back for a second or so.”

Pain and twisting were only too well known to her. Winnie patted Eddie’s hand and took the pillowcase and scissors from him. “I’m glad you’re fit as a fiddle now, then.”

She set to work cutting holes in the pillowcase so she could see out of it, then pulled the thin fabric over her head to check their position.

“How do I look, CeeCee?” she said, peering through the cut-outs at her sister.

Celia paused in adjusting her hump and grinned. “That’s fantastic, Winnie-bear. Between that and the long gown no one will know it’s you!”

It wasn’t long before everyone was ready. Celia was first out the door, affecting a slow, dragging walk to go with her hump. Henry shuffled after her, barely able to lift his feet in the giant hip waders. Winnie followed them, her sturdy shoes planted solidly on the ground. She tried to change her walk, taking tiny mincing steps, but she caught her lame foot in the trailing hem of the nightgown and nearly fell. With a breath to settle herself, she continued on. Her normal gait would have to do.

They joined a gaggle of children on the commercial dock by the store. Winnie held back, feeling shy in the large group. Celia and Henry were in the thick of things, giggling with their friends.

“All right,” Celia said from the centre of the group. “Where shall we start?”

Shouted suggestions followed, but Winnie heard one over and over.

Winnie smiled to herself under the pillowcase. Of course it was Celia taking the lead. Strong-minded was how Mom and Nan described her. Stubborn, forceful, determined… those were the words Winnie thought of. She hurried to keep up with the group, her lame foot slowing her down as always.

At the kitchen door of the Irvine’s house the children waited until everyone was gathered close. Together, they shouted “Any mummers ‘lowed in?”

Even at the edge of the group Winnie could feel them jostling in excitement as they waited for the answer. She knew, they all did, that there was very little chance of anyone saying no. But still there was that moment of waiting, of “what if?”. Was anyone else holding their breath?

The door creaked open, and the elderly Irvines greeted them with smiles. Winnie let her breath out and followed the surge of energy as the mummers swarmed inside.

“Come on in, dear mummers,” said Mrs. Irvine, settling into her rocking chair by the fire. “Let’s see if we knows you.”

Her husband stood by her side, one hand resting on the carved wooden back of the chair. Both peered at the gathered, costumed children with interest.

“You there,” said Mr. Irvine, pointing to Henry. “I know them boots, they belong to young Bert Matthews.” He measured Henry’s height, puckering his lips. “And by your size, b’y, I’ll be guessing you’re his nephew Henry.”

Winnie’s heart sank, and she could feel the disappointment radiating off her brother. If she’d been closer, she would have squeezed his hand.

“Ah, you’ve got me,” Henry said, removing the fabric scrap he’d tied over his eyes. “But do you know the others?”

Mrs. Irvine grinned like a loon and pointed at a tall, skinny figure in an old dress and fisherman’s cloak. “That’s no girl, that is. I declare you must be young John Pink.”

“No,” replied a high, false voice from deep inside the hood. “You’ve not got the right of it.”

A few of the mummers giggled. Winnie shifted her weight so she could lean against the doorframe.

They made a few more guesses, none of them correct, then offered up cups of hot cocoa for everyone. Once everyone had drunk their fill, Mr. Irvine pulled out his fiddle.

“I s’pose you can dance, then?” he said, eyes twinkling, as he set the bow to the strings.

There was a low hiss of sound and a lot of bobbing heads.

There never was. That was part of the fun.

The music started, and feet began to tap. Winnie stayed put, leaned against the wall. She enjoyed the energy of dancing, but it was difficult to participate in. She bobbed her head to the beat and tapped her fingers against her leg.

Henry wove his way through the twirling bodies and stomping feet to stand beside her. “You all right?” he asked in a low voice.

She gave him a long, steady look through the eye-holes of her pillowcase. “Yeah sure, why wouldn’t I be?”

He shrugged. “I just wanted to make sure.”

“Thanks,” she said. “I’m enjoying watching everyone.”

Henry grinned at her. “Want to join me?”

“You know I’m not much for dancing, brother o’ mine.”

“We can stay right here in this corner. Here, take my hand.”

Hesitantly, she placed her hand in his.

She did, and he followed.

They continued to dance, small quiet movements. When it came time to spin, Henry put his hands at her waist and lifted her around with surprising strength. Winnie giggled, gasping slightly, as he set her back on her feet and made sure she was steady before letting go.

“How’d you get so big and strong when you’re just a kid?” she asked teasingly.

“Just work, I suppose,” he replied with a shrug.

The music came to an end. Everyone was laughing and talking at once. The faces that were at all visible were flushed with heat and excitement.

“Oh, this heat,” said a falsely deep voice from the middle of the group. “We’d best be on our way!”

They tumbled out the door into the cold December night. A few children stumbled into snowbanks, enjoying the chill after the heat of the Irvine’s kitchen. Winnie was one of the first to leave, making her way down the dock a bit to give room for the others.

“Where to next?” shouted an excited voice. Not Celia this time.

“Over to the Pinks’, and then maybe to the Taylors’ place?”

Winnie’s knee twinged, a small familiar ache. Walking all that way in the snow sounded like a lot of work. Even if the paths were cleared. She hesitated as the crowd began to stream along the dock towards the Pinks’ place at the far end of the bay. Henry, she noticed, had replaced his mask and was in the midst of the crowd.

She straightened, watching as the others drew father away. One lone figure looked back at her. By the hump she knew it was Celia. Winnie waved at her sister, a sort of “go on” gesture. After a moment’s hesitation, Celia ran after the gaggle of mummers.

Winnie smiled to herself, enjoying the memory of warmth, companionship, music, and laughter as she slowly made her way home.